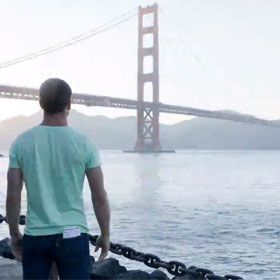 This Levi’s ad has to be one of the most popular viral’s of the year. It’s iconic in its stop motion design and the color is beautiful throughout. We like the innovative thinking and creativity shown in this video, it’s something not many brands are willing to do, but the pay off is substantial. After seeing the completed video, knowing the effort that went into it makes it even more impressive. Be sure to watch the behind the scenes video below.

Here is a pretty awesome behind the scenes video of how the crew set up and shot the “Guy Walks Across America” video for anyone who is curious. The shoot itself was deceptively difficult and they crew put in a lot of work to make it look good. Fortunately for us, they pulled it off!

With the release of the iPad there has been an influx of this mock video promos which compare it to the iPod touch and question its usefulness. This video is relatively humorous, but it misses the mark on many of its sarcastic taunts. However, the video still managed to go viral and garner many views.