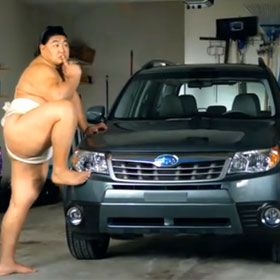 Subaru is a company known more for their competitive rally races than amusing commercials, but this viral seeks to change that. It stars some very large sumo wrestlers and the Subaru Forester. The ad lightly parodies the Paris Hilton/Burger King commercial in some parts, featuring the Forester and it’s sumo hood ornament going through a car wash together, with the wrestler playing in the water. Overall, this ad is funny, sexy, and effective in its ability to inform while creating laughs.

Lonely Island teamed up with Rokk vodka to create a video that is full of laughs and features a brand that is willing to use comedy to sell a product. The ending is particularly funny as the music and slow motion stop, the guys are caught playing in water that’s being sprayed on them by a very serious looking bearded man.

This is a pretty interesting viral from the people at Minecraft. This video starts out like a rap video with a muscular man looking angry and threatening while looking into a fisheye lens. However, the video abruptly changes when a crazy kid comes out of no where and mines a diamond out of the muscular man’s head. This video has received well over a million views since its release, possibly aided by the existing Minecraft user base. The video is strange, but it works for the online space where oddities help videos stand out. The unexpected pay off this video has makes it especially viral.