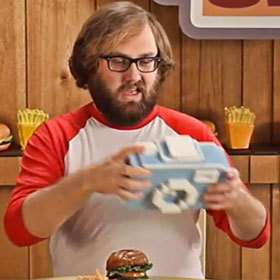 Anyone who is on Facebook can immediately appreciate this Altoids ad, and we applaud them for targeting the market and medium that is used most for sharing videos. The best thing about this video is that everyone who watches it knows at least one of the types of people they describe. They aren’t afraid to make fun of people but they recognize the uniqueness of these individuals and do it in jest. They do have some risque lyrics at times, which is perfect for the viral space. They have been rewarded for their funny lyrics with over two million views, sing on Altoids!

Old Navy is known for their colorful, musical commercials which normally air on television, but this ad (which is likely running both online and on tv) seems to have captured even more attention from the interwebs due to the celebrity look-a-likes they have hired. The main female character reminds us of Kim Kardashian, and there is a fellow who looks remarkably like will.i.am. The success of the video could have something to do with the celebrity look a likes, but the song is catchy and people tend to enjoy bright colors and strong choreography. Whatever the reasons why this video is popular don’t matter as much as the two million views it’s gained since being released.