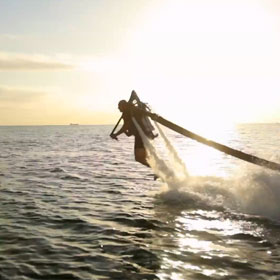 Do you remember back when James Bond first debuted the rocket jet pack in Thunderball (1965)? Well its been over 50 years, but thanks to some greentech we have a new invention which gives humans the same power of flight without the environmental impact. It’s a water powered jet pack! JetLev produced this ad to promote their device which looks like two fire hoses attached to a backpack. The guy “flying” in the video has to be happy about his job, and all the children in the video seem excited about it too. The product in this video is viral, but the ad itself isn’t viral separated from the device. For instance, if this were a car commercial it wouldn’t have a million views. Still, the internet is captivated by this water powered flyin’ machine, and so are we. Sign us up!

Valve, you continue to impress with your Portal ads. The simple and unexpected pay off of these ads is excellent. In this ad, for example, the simple cartoon drawing and great copy combine for laughs as the narrator announces that they’ve “lost a lot of expensive equipment” after showing the human stick figure falling a great distance only to break its legs and arms off. Automatically the viewer assumes the narrator is talking about the people they’ve lost, but when the animation continues, the other stick figures procure the Portal device from the dead figure and place it on a stretcher while a robot sweeps the pieces into a fire. Perhaps it’s a dark sense of humor that makes that funny, but it’s also very unexpected. After two million views it’s safe to say that the Portal fans out there are excited for the new release of the game. We’ll just have to wait and see if the game will be as good as the ads.

As we’ve mentioned before, it’s always exciting to see new brands enter the viral arena. This time we tip our hats to Bic, who have created this great viral centered around the fictional sport of human curling. Our protagonist is able to vanquish his opponent thanks to a fine blade from Bic, which he uses to eliminate all his body hair, making him the perfect human torpedo. The whole concept of this video has viral written all over it, but the execution is what helps it succeed. When the ad finishes and there are men wearing hair-kini’s shaved out of their own body hair…we just shake our heads at the lengths Bic went here. However, after several million views, this ad has proven to be viral.

The DNAFoundation, which stands for Demi aNd Ashton Kutcher, have created a series of very well done spots to make people aware of human sex trafficking. The cause is not funny, but the way it is presented is. The ad directly targets men and challenges them to be “real men”, not ones who lose their car in the parking lot, for example. This spot stars Isiah Mustafa of Old Spice fame wandering shirtless through a parking lot, avoiding obstacles while blind folded and finding his car while another man is unable to find his car with all his senses intact. This ad hasn’t received the recognition or views that we would have expected from such quality writing, but there is no real formula for viral, and the internet is still a 100 sided rubix cube.

Adult bibs have always been popular with certain people, truck drivers and those with weakened phalanges (always a chance of a spill if your hands can unexpectedly give out on you). But who will democratize this specialized item? Enter the adult bib! Now, those who wish to stare at hot women, drive, and drink coffee all at the same time can do so with utter disregard for their clothing because the adult bib has your back (or front)! There is an inherently viral aspect to this video, but the seriousness with which they produced the video makes it ironically viral as well. Perhaps Rebeccca Black and the Adult Bib people can unite their powers of internet irony for a super viral music adult bib video?