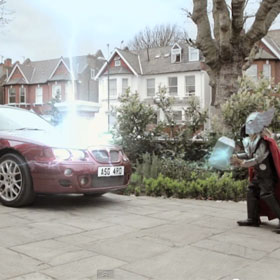 Marvel has done a shameless recreation of the Star Wars VW ad that was so popular during the Super Bowl, and boy does it rock! The pay off of this video is exponentially better than the VW ad, and much funnier. The audience (including us) was probably expecting a lesser payoff, but we were pleasantly surprised by the big explosion. Our hats are off to Marvel for taking a risk on a viral. With well over a million views this video quickly went viral and for those who understand the joke, it’s awesome. Old Spice has done it again with this very funny viral featuring a cavalier adventurer being eaten alive, attacked by reptiles, hit by cars, near drowning, all while keeping his cool to tell you how important it is to not smell bad while surviving dangerous situations. This Old Spice ad featured far more visual effects than the normal videos and a different Old Spice guy, but what continues to make these videos so good is the writing. The host is still good, no Isiah Mustafa, but good, however the writing is really what separates Old Spice from so many other mediocre virals. Keenan Cahill has been an internet sensation for some time now, and he is now teaming up with the World Champion San Francisco Giants (who some of our employees have followed since birth, while the rest of us patiently wait for the Mariners to make it to a playoff game). If you’re unfamiliar with Keenan Cahill, he has a rare genetic disorder which causes his appearance to be the way it is. His YouTube videos help raise money to pay his medical bills. This particular video is especially fun for us in SF to see “the bearded one” and Cody Ross dance around with Lou Seal and lip sync. This video quickly went viral, receiving over a million views in just a few days. That is not surprising considering the built-in following both these icons have and we expect the view count to continue to grow in the coming weeks. Please support Keenan Cahill’s cause by watching this video and showing it to your friends, this is a viral video with a point to it. About a year ago we featured a stop motion t-shirt viral by YouTuber’s Rhett&Link, and this is strikingly similar to what they did. While the overall commercial is different, the fundamentals are the same. Rhett&Link’s video was very popular, even turning into an ad for McDonald’s, so it’s not that hard to believe that Evian could have found out about it and thought they could put their own spin on it. Dancing baby t-shirts like the ones in this viral would have been a fun way to continue to promote this internet sensation. If you’re a brand or agency in need of a commercial or viral campaign, contact us here.