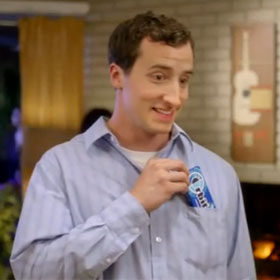 You might recognize our friend Ned Hosford in this funny Orbitz commercial. He stars in this ad as a guilty boyfriend standing accused of having a dirty mouth by his girlfriend. What she doesn’t know is that the party he is at got really hot thanks to a game of spin the bottle and an old woman and her donkey. We give Ned two thumbs Up.

This Double Life Film Festival ad for the Young Directors Award is clever and inspirational. The pay off is hilarious, as the little girl creates havoc for a newly married man and his wife. Her smile is devilish, alerting the viewer to her contentment with causing drama. This viral is simple and well executed with a fantastic pay off that helps secure its status as an amusing and effective ad.

If you’re a fan of the Portal series of games from Valve, the upcoming Portal 2 release is already on your radar. These fun ads are directly in line with the sarcastic and witty humor we have come to expect from Portal, and the sequel looks like it’s going to come in on the heels of its successful predecessor and not disappoint. The playful and cheeky ad targets all ages with gentle humor as robots train in amusing situations preparing for the game of Portal 2. The CGI ad is very well done and has gained over a million views. There will likely be more of these in the future and we look forward to them.

Well Skittles, welcome to the viral party we have going on here. It’s a comfortable place to be, and it looks like you are making yourself at home with this hilarious and creepy ad starring a grown man in a cat suit. The interactive quality of this video makes it viral gold… that and its use of a man cat. The exciting thing about viral is the ability brands have to interact with their audiences, and when done well, greatly succeed. We think after four million views this viral can be considered successful. From the looks of this video, Skittles will be doing an entire interactive campaign with the idea of putting your finger on the screen. Hopefully they will all be as good as this one.

Athenos yogurt is not something one would immediately think of as a product that could be viral, but if you thought that, you’d be wrong. Athenos cast an amazing “Yiayia” who is absolutely hilarious. Her facial expressions and line delivery seal this commercial as a quality viral. The copy isn’t inherently funny, but the performance brings it to a new level. This is backed up by the one million views it’s received since its release. Athenos has a lot of potential with this character of Yiayia and hopefully the writing will continue to help this campaign continue along.

The Sony Ericsson Xperia Play phone has a new viral, and it’s pretty cool. Kristen Schaal hosts the commercial that starts out like any other standard ad, but quickly turns strange after the video is played in reverse, revealing a secret message and a demonized Kristen Schaal. The video has been moderately successful with 600k views but has had a very positive audience response, something Sony Ericsson helped cultivate by responding to YouTube comments. Besides a few other campaigns, most large brands don’t respond to YouTube comments, but it is something that people respond positively to, making the brand feel more connected to the audience. Most phone commercials don’t have the fun edge that this Xperia Play does, and maybe we will see a more creative use of commercials in the future if this one is successful enough.