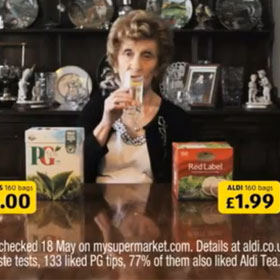 Aldi, we don’t have your brand in the United States, but thanks to YouTube, we have your commercials. This is a very dry and slow ad with a great reveal at the end. Perhaps the most amusing thing about this ad is that it reminds this writer of his own grandmothers fondness for gin. With a modest amount of views, this viral may not be one of the most successful brand attempts, but it still does an excellent job of executing a humorous ad.

This isn’t the first time Spanish brewing company Estrella has made a long form viral commercial, and if they continue to be this successful it won’t be the last. The previous commercial had three million YouTube hits and this one is already fast approaching a million. Estrella deviates from the common YouTube form of commercial by having a longer run time, almost three times longer than most viral ads, and is almost like a short narrative rather than just a commercial. This particular ad seems to tell the story of a burgeoning career and romance for a man and a woman in culinary school. There is a lot of fun and playful excitement in the ad and the people are happy throughout the story. It’s an interesting way to do an ad because there is more emphasis placed on the story than the beer, which instead becomes more like a product placement ad rather then an outright ad. Either way, it’s success speaks for itself.

New Era, maker of hats for the MLB, has released this hilarious viral starring Alec Baldwin and John Krasinski. Each man represents a specific fan base, Baldwin the Yankees, and Krasinski the Red Sox. Anyone familiar with baseball quickly understands that these two are mortal enemies and the ad plays on that. In the ad Baldwin runs up to Krasinki’s apartment and punches him, then gives him a giant wad of money and runs away. The acting in this commercial is excellent. It is not the first or only ad starring these two, but it is currently the most popular one. The other videos are of the same high quality but aren’t necessarily as viral simply because they aren’t as outlandish as this particular ad. We hope New Era continues to produce this awesome ads because they are really fun to watch.

Friskies is lucky. Very lucky. Few other brands have built in viral potential like a cat food making company. They have started to leverage this potential by creating games for cats on the ipad, but where they struck gold was creating user-gen-feel videos of cats playing these games. Like the ancient Egyptians the internet worships cats. With A few weeks down and over a million views registered little more proof is needed. This looks to be a campaign that has many follow up videos and it’s possible that Friskies will ask users to send in their own videos of their cats playing the games. Friskies has done a good job creating a simple video that resonates well with internet users and it’s paying off for them.