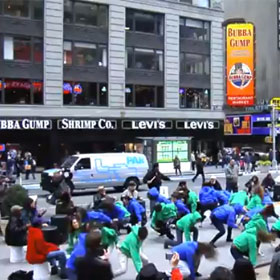 Flash mobs are the newest mainstream viral sensation. Sponsored by companies such as T-mobile and AT&T they require a lot of extras and choreography but people are so fascinated by these random singing and dancing sessions that the payoff is usually at least several million views and a lot of positive YouTube PR. This particular flash mob sponsored by Wells Fargo is too long at close to seven minutes, and should have been cut down to between two and three minutes for maximum impact on the short attention span of YouTubers. The break dancing in this particular viral was especially good, and the costume change was also well done (to signify the take over of Wachovia by Wells Fargo). We would love to see Wells Fargo continue to make virals that expanded away from the flash mob and into Old Spice territory, but we imagine it must take a lot to make banking interesting.

Budweiser has long been known to have creative and successful advertisements, but lately they haven’t been as visible in traditional media and before this ad, haven’t had a significant online presence at all. This ad, which has gone viral, shows off the newest gaming craze: Poolball. It combines soccer and pool to create the largest pool table and smallest soccer field. The rules are a mix of soccer and pool, so feet and heads are used, but no hands, and the soccer balls are the colors of traditional pool balls. This commercial is one where the idea is viral, and the funding from Budweiser helps execute it to the extent it needs to be in order to gain viewership. The ad hasn’t yet pulled in huge numbers, but it’s still very well done and a great creative idea.