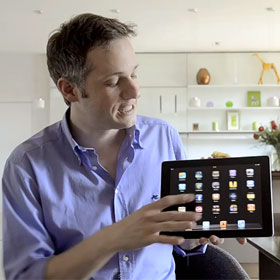 Sometimes we all need a little something to make us smile during the day and this video should do just that. A very talented magician, Simon Pierro, has put the iPad at the center of his bag of tricks and created a great viral that is full of fun and fantasy. Throughout the video he plays with perspective, taking things out of, and putting them back into the iPad. He even pours milk into the iPad, soaking a friend on Facetime! It’s not an ad for the iPad from Apple, in fact, this is supposed to be a video showcasing the new features of iOS 5 facilitated by the iPad. But to be honest, it doesn’t much matter who or what this video was originally set to showcase, the end result is a head scratching, smile inducing, slow motion-replaying viral that keeps us entertained.

Drool. Allow the majesty of a world record breaking 332 ft car jump to sink in. Now that you’ve fully ingested the fear of nose diving 100 ft before making enough speed to jump over 300 ft, we can focus on the brilliance that was this Hot Wheels viral campaign. The six million views this video has gained so far is remarkable, and one of the most viewed videos listed on our viral video round-up to date. Hot Wheels managed to create a lot of excitement and mystery around this jump with videos preceding it, including tease videos and an expected release date for the video showing the actual jump. The other thing they did to maximize the campaigns longevity was to hide the drivers identity, so even after the jump video had been released viewers would be drawn back again to figure out who was crazy enough to pull this off. The subsequent “reveal” video has pulled in almost a half million views, citing the curiosity aroused by such an insane human being. Overall, this was a solid campaign, hopefully other companies will continue to do such fun and exciting things for online viewership.

Well, now that we’ve seen everything we can happily die in peace. That is, of course, not until “go to a nude gaming party” is crossed off the bucket list. Alas, this is nothing but an ad, but the buzz it caused was really something to behold. The internet was a flurry with questions regarding the legitimacy of this viral, even though it is clear this is an ad. Wishful thinking on the part of the masses, we suppose. After racking up nearly a million views it can be safely assumed that nudity is the only thing as viral as kittens. Rounding out the top three most viral keywords would be gaming. So, to create the ultimate viral perhaps its time for a nudist gaming party starring purring kittens, sponsored by Google, with a Lady Gaga cameo. Eat that, Smart Water!

The Samsung Infuse apparently has a very realistic and vibrant display, something Samsung would like you to believe and subsequently laugh at after watching this ad. This commercial certainly went viral but was likely aided by a large marketing effort, including broadcast plays. They’ve done a pretty good job here of creating a simple but funny ad that sells the excellence of the phone screen while creeping out those who are afraid of spiders, because lets face it, the spider they chose is freaky looking. Admit it, it’s ok. We won’t judge. Phone companies have been getting deeper into the viral space because so many of their customers are in the coveted 18-35 year old age range whom spend so much of their time online. Nearly a million views, they have hit their mark with this ad. We will see if Samsung will continue to use the internet as a marketing device, but with success like this, it’s likely they will revisit the space again.