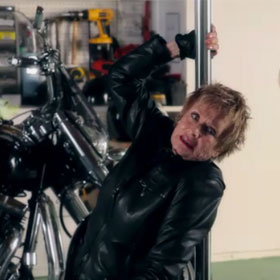 Network Solutions released this parody viral in January starring Cloris Leachman talking about what it’s like to be a Go Daddy girl, including the inherent problems with sweat and stink. What really wins us in this ad is Leachman’s performance, whether she’s being caught pulling up her pants or sleeping on the job. We also tip our caps to Network Solutions for daring to produce a quality, though risky, viral. These types of video’s are more creative and interesting to watch then a simple branded infomercial.

This has truly been a week of iPhone 5 rumors online, but this video does a good job of trying to put some of those rumors to rest. They give a probability meter which gives a percentage of the chance something is actually true regarding a rumor. It looks like the fake iPhone 5 website from below has the right idea when it comes to the phones general design, but this video does a lot better job of revealing specifics without saying any if the specs are set in stone (unless it has already been verified). The video itself was done quite well. The 3D modeling is well done and the music adds a nice touch. It looks like we will be waiting a little under a month or so for an official announcement for the phone, so stay patient!

Without getting too involved in this year’s world wide political upheaval, it has been a crazy year for social struggles. The recent London riots appear to be coincidentally included in this Levi’s ad, but it was released before they even occurred. Levi’s have always put out deep, philosophical ads concerning the state of the youth market and their position in society, but does this ad push that too far? From a viral standpoint, the conversation created by the advertisement and its coincidental connection with the riots in London have bolstered it into the spotlight, which suggests the message is resonating with people. In the end, this is a positive message, and any political affiliations are created internally by the viewer; the only message here is to live life. So live it!

In an effort to look more legitimate and organic, brands sometimes release videos that look user generated or coincidental, but they have actually been designed that way. This is a video that looks to be user generated, except for its high quality polish and screenshots. The interesting thing about this video is that it was released on Break.com. If this is a guerrilla ad by Google, it was well placed.

Adidas has come out with some innovative commercials in the past, but this one seems to follow the philosophical and inspirational format normally reserved for Levi ads. The commercial showcases numerous hip hop artists who are known for their creativity and originality, something Adidas shoes will help one gain or embody. Being big fans of hip hop, we really enjoyed this viral exhibiting the fun and originality the culture has to offer.

Normally fake videos don’t gain much attention, but this iPhone 5 video of a secret web link inside a German Apple website was really well executed. It’s interesting that someone would put this much effort into a fake video, but some people have hobbies. The lack of any musical track under the website makes this video stale, but the content is so convincing that it seems most people don’t mind. We think it’s fake because you can see that the site loads from a local file in the very beginning.