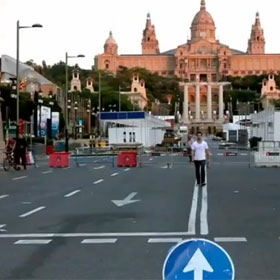 STA Travel Australia released a video that is very similar to Levi’s “Man Walks Across the Country” Viral ad. They sent three guys around the world and the results are pretty awesome. They crammed 44 days of travel into a one minute viral that has reached nearly 100k views at the time of this writing. The production quality is great, and the difficulty of accomplishing this task for a one minute ad is no small feat. We wouldn’t mind taking a trip around the world to shoot one of these videos ourselves…

Planned Parenthood have dipped their feet into the viral pool by releasing this strange Bollywood-style dance promoting birth control with no co-pays. The viral has no speaking parts, just a woman dressed up as a birth control package dancing around between two men. The production value is high, the costume design, choreography, and idea are questionable, but it’s refreshing to see more types of companies venturing into the viral space.

Nokia has released a very entertaining viral stop motion ad to promote their new phone. The ad revolves around a fisherman in his boat who gets swallowed up by a fish and is then spit out again. The most interesting thing about this video is that they use full-sized props, even though they look like miniatures or toys. The effort put into this video was pretty remarkable, and the result is a highly entertaining, well shot, and well executed video. The creativity here is likely what helped propel it to viral status.

K-Swiss has released another video using Danny McBride as Kenny Powers, the MFCEO. The quality of the humor and foul-mouthed antics from the original spot continue as we follow the competition between Jon “Bones” Jones and Urijah Faber. K-Swiss is taking their promotion of their new shoe, Tubes, to a whole new level with the amount of internet advertising and use of celebrity cameos. We look forward to seeing more hilarious K-Swiss ads in the future.

Lets be honest, if Ross Perot had paraded around Texas running over cars in a tank while on the campaign trail he would have become the first three term president. This Mayor from a far off country few have ever heard of has taken the idea of a political viral video to new heights by incorporating humor and a PSA into the same informative message.  We know this is a set-up, but does that take away from the fact that he ran over a Mercedes in an APC then cleaned up the mess afterwards? Not one bit! I’m not sure how difficult it would be for San Francisco’s interim Mayor Ed Lee to get his hands on a military vehicle, but perhaps he could use it to make a push for his campaign.

From the looks of this guerrilla ad, it seems that Cosmo, a magazine usually associated with women, is going to release a new Cosmo targeted at men. This ad was pretty weird. It wasn’t very believable that some random guy would walk up and start playing with this ladies iPad head. We’re pretty sure this won’t be Cosmo’s last attempt at a viral ad targeting this market though.