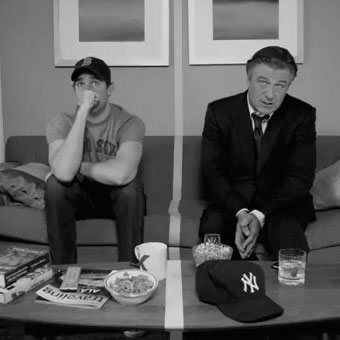 April 8th, 2011 was the day the Trash Talking began for New Era Cap Company. Over the last 6 months, the John Krasinski, Alec Baldwin “odd couple” has developed a respectable amount of buzz on TV, views online, and an even larger amount of chemistry. The story (6 episodes and hopefully counting) has been enjoyable to watch and easy to find as New Era simultaneously seeds them online as they air on TV. This cross-media distribution strategy provides a great way for viewers to discover the “couple’s” antics through traditional media  and then dig deeper into the story (on)line. Despite spray-painting dogs, burning down houses and peeing on carpets, it manages to stay surprisingly high brow and very much witty. The acting is believable (I would hope so) and the duo plays well off each other.

This latest installment may not be quite as good as the previous ad, but it’s up there. The story plays with the notion that every male sports fan childishly believes he has some influence on the outcome of the game he’s watching. As is evident in this commercial, this belief can have some unintended, even messy consequences. As a result, the spot hits home for many viewers and  - even if you’re not a male sports fan with delusions of grandeur – it’s funny. 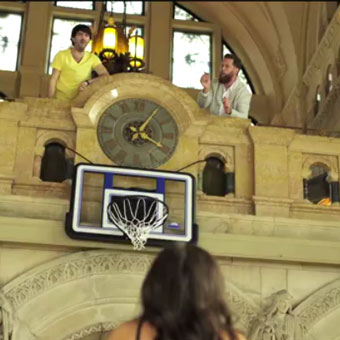 Further research shows that the campaign is funded by the ICM Registry, a company that hopes to satisfy ICANN domain requirements by introducing transparent audience-appropriate URL extensions (.XXX and .KIDS are the first). The video currently has about 1.2 million views online, seating it in the top 1% of “viral” advertisements on YouTube, but its lack of viewer-engagements (ratings and comments) suggests many of these may be through paid placements. All said and done, I guess the commercial did what it was suppose to: it led me to www.about.XXX, where my unresolved questions from the commercial were answered. I also chuckled a bit in the process. 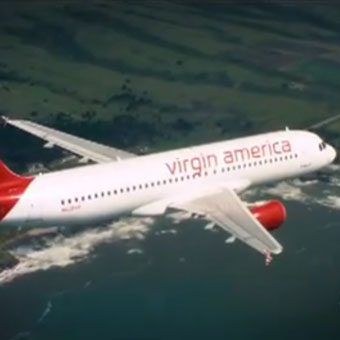 Xerox released this ad on Tuesday of last week, garnering very little attention on YouTube with only 408 views – half of which may be mine.  It is a longer, 2 min web spot  that plays off their shorter 30 second TV commercials. It’s worth recalling that Xerox had some rough times in the early 2000′s but seems to have been building their brand steadily in recent years, working with Ducati, Michelin, and now Virgin – a nice step forward for them.

This commercial employs some nice visual tricks for humor, which warrant repeat views to notice them all. Despite the over-the-top gags, however, it’s the passengers subtle reactions to each change that make the commercial. The only down side is that after watching this video 200 times (I said half, right?) I still have absolutely no idea what the narrator is saying. I’m so fixed on watching the passenger that I zone out the content.Even if I don’t get it this time, I’ll definitely be on the lookout for the next Xerox commercial.

The TV spot, lasting about 30 seconds, is a completely different commercial in the same airplane setting and following along the same concept. Not as clever as the viral ad, but still worth viewing. Together, these spots by Xerox follow the growing trend of cross-media campaigns that span TV and web. Expect this trend to continue.