Yes, the Honey Badger is quite “badass”, even if you haven’t seen the original video (lots-o-swearing), which this recent TV spot plays off.

The original viral video features the voice of Randall, an instant viral video ‘star’ who re-narrates old National Geographic videos. Randall’s flamboyant comic narrative earned the video a whopping 19 million views since January, while managing to teach us something (albiet very little) about the animal.

The TV commercial leverages the viral video success of the “badass badger” and does so pretty well. First, Wonderful Pistachios was smart enough to hire Randall for the job of the narrator. His delivery is on point and there are some new clever lines in the script. Second, they upped the production value and added that appropriate TV polish to the spot, placing the badger on infinite white and even adding a visual effect or two (without ruining the brash comedy of the original).

At a high level, it’s great to see mainstream commercials taking on viral media – a trend that we expect will continue as more companies try to attract the 18-35 year old demographic who is spending more time online. This is not a new concept to Wonderful Pistachios who have used the likes of Charlie Brown, Kermit the frog, Keyboard Cat and Angry Birds to push their brand in the past. 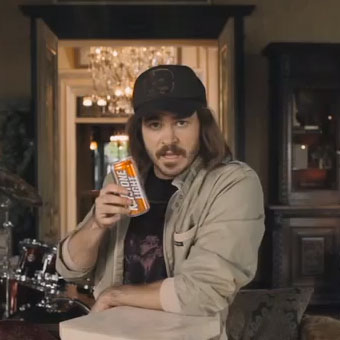 This new  ”Keith Stone” series by Keystone is neither particularly funny nor original, but plays well as a hybrid for YouTube pre-roll and TV. It uses the ‘overly confident old spice man’ formula like every other commercial that seems to be playing these days… That being said, this latest Orange Can commercial is a step up from the rest, mainly because the lead actor has an unexpected moment of humility. It’s a flash, but it’s there and it makes the commercial that much better.

The new notion that the overly confident man is the way to sell a product isn’t new anymore. It’s old, over used and a bit tired at this point. Everything from shaving cream and beer to mattresses and laundry detergent is being sold like this. It was funny and witty when Old Spice did it, but it’s not anymore. Actually, it’s still pretty funny when Old Spice does it, everyone else should consider investing in something original. It’s good to see Keystone at least admit their confident man isn’t always confident. If you’re wondering when that moment is – it’s when he mentions the truffles.

The orange can on the other hand, makes the commercial a bit more interesting. It’s a limited edition can with a ‘special lining’ (like coors, maybe?) that is only being sold until the end of November. There is no competition or reward for finding it, it’s simply something new. Some have stated that it’s for hunting – orange colored and the commercial makes a hunting reference. Coming out with a ‘new’ product gives the viewer something more than a now-familiar ad format. I’ll put Keith Stone in second place to the Old Spice guy – he’s at least gruff, weird looking, and intriguing. We’ll keep an eye on them and see if they continue to improve their campaign. 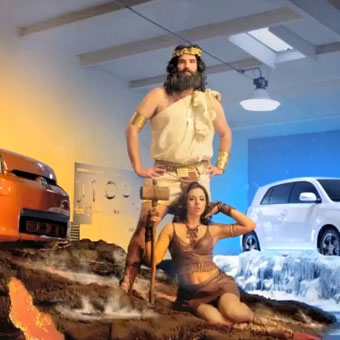 This commercial, a twist on MTV’s Cribs, isn’t particularly original or laugh-out-loud funny, but is noteworthy as a component of a fairly well integrated TV/Web campaign. The product integration is blatant and borderline overdone, but manages to fit well with the creative Cribs narrative. The video leads viewers to a body of related content on YouTube, which further develop Zeus’ Crib story and glory.

Scion’s recent spot follows the trend we mentioned last week (and above in the Badass Badger post); TV commercials are gearing themselves towards the online audience. At the end of this ad, Zeus mentions “I’ll be over on the youtubes”. Scion is doing the same thing that New Era, Old Spice and Captain Morgan have been doing: normal 30 second to 1 minute TV spots advertising the viewer to follow them on YouTube and learn more. It’s becoming an increasingly-trusted strategy for companies to put out TV commercials with a long tail of YouTube content that aims to earn organic audiences. When the campaigns hit, the free earned media makes the campaign extremely cost effective. When they don’t, the brands simply get the viewers they pay for (like traditional media).

An interesting side note: we wonder what will happen when all tv goes to the internet… the distinction of YouTube vs. TV spot is getting blurrier and will continue to do so. We suspect the pricing across media will as well.