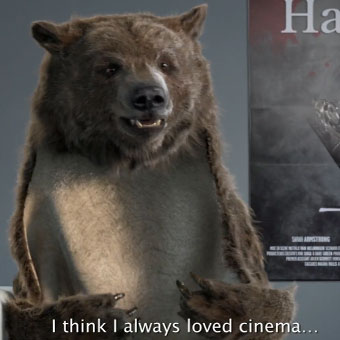 This is another commercial that throws viewers for a bit of a loop. Similar to the Playstation spot, things seem one way but quickly turn: for the better. It starts out very dramatic and serious, turns confusing but satirical and humorous then finally makes sense. Just the way a commercial should be made.

Canal+ is a premium french channel that also produces many auteur films and they let the commercial play with this concept.  ”The more you watch Canal+, the more you will love cinema”, even to the point of becoming an film auteur. The commercial does a good job at poking fun while keeping the viewer interested, albeit confused for a majority of it. This  is a good thing though, unlike previously confusing commercials we have mentioned, this one does it right: the viewers confusion is erased at the end of the commercial. It follows an arc that is enjoyable to watch and discover as the comercial goes along. The viewer is left with a sense of, “oooooh, I get it”. This is a reaction more commercials should look for from their viewers. It’s a bit ironic actually, most french auteur films tend to leave their viewers purposefully confused. At least Canal+ has gotten it right. This isn’t new for them though, they have been doing some pretty funny commercials for awhile…never underestimate the power of a great story. 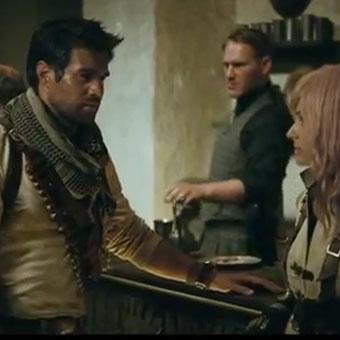 This new 2 minute commercial spot has been a huge hit over the past week. Pretty much every gaming website, including major news studios have praised it. Playstation may have strayed from the comedic antics of their beloved “vice president” Kevin Butler for this one, but it is well worth it. We’re also pretty confident Mr. Butler isn’t going anywhere, anytime soon (seeing as they just brought him back from his stint as president of Economy Flooring) . The production value of this new commercial is almost perfect and at 2 minutes long with an estimated $50 million spent airing it for prime time, it better be.

The spot has a great narrative and follows a couple of world war 2 soldiers through a bar (somewhere in germany, perhaps?). Nothing out of the ordinary here; until they make their way past the bar patrons and any viewer with some knowledge of video games begins to recognize characters from a wide range of games. Soon the characters start talking about their own trials,tribulations, and greatness within their worlds but are interrupted as one of the world war 2 soldiers speaks up and gives his thanks to a higher being. The commercial is fun to watch for many reasons, but it plays best the first go around when you as the viewer have absolutely no idea what’s really going on in this bar. When you do finally figure it out, it’s a bit chilling. A strange feeling when a commercial can give you the chills…it’s even weirder when it’s a commercial for video games.

With all the high praise this commercial has been getting, we probably don’t need to jump on bandwagon, so lets talk about the (small) negatives. Playstation did such a great job with all the characters, why cg (computer generate) two of them, presumably the best most recognizable characters? It could be just that, Playstation didn’t want to compromise their best known characters for a real persons look. At the same time, everyone has seen the cg version of these characters in the actual game, what makes this commercial so fun to watch is that these are real actors. Also not a big fan of the generate “Michael” portrait, which obviously is not a real photo and looks a bit awkward…don’t know of anyone who actually plays video games like that, but I digress.

It may be time to finally give credit to the video game industries ability to tell compelling stories, even more so than most hollywood movies. It’s no coincidence that a large portion of films are remakes of games. It’ll probably be a little while longer before those movies are actually worth seeing – halo movie, maybe? 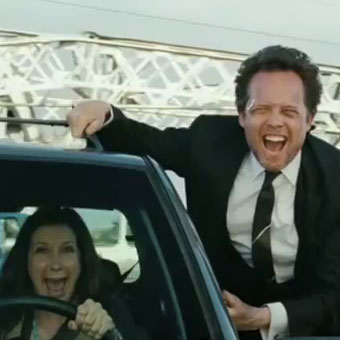 A great commercial with a great legacy of great commercials behind it (redundant?). Mayhem has become well known among the commercial mascots; up there with Old Spice guy and Kevin Butler of PlayStation. In fact, there have been a few Mayhem halloween costumes floating around this October. Allstate has a wonderful concept with this character and the campaign which began running in the summer of 2010.Dean Winters, your average television character actor, has probably become most noticeable for his part as Mayhem (anyone remember him as O’Reily on HBO’s Oz?).

The Blind Spot commercial is one of the best Mayhem spots so far. This isn’t to say the other ads aren’t funny, this one is just funny(er). The idea of a person playing the role of any item, from home satellite, to raccoon or a baby, all the way to something as intangible as a blind spot, is interesting in and of it self. The 5 seconds between when he tells the driver, “you’re good” and the slow motion laughing as her car spins out of control, is pure magic. It’s not a funny situation at all in real life, but is extremely funny when you give intangibles personalities, especially Mayhems personality.

The Mayhem concept follows the line of annoying or bothersome “beings” put to out to pasture by the product the commercial is selling. Examples of this are the “Noid” from old Dominos commercials or “Digger” from the more recent Lamisil commercials. The big difference between Mayhem and these other guys is that Mayhem’s character evolves and is never stomped out by Allstate, only avoided, which means he’ll always be back and we can’t wait for the next round of Mayhem brought to us by Allstate.