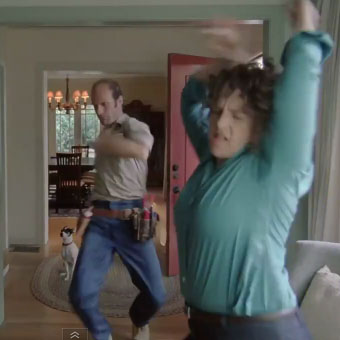 Funnier is better. When a commercial is funny, it is remembered. There is a big issue with this though, it has to actually be funny. Recently commercials have been trying much too hard to be funny and in the end, are just annoying. The impromptu dance party in this commercial is fun, definitely, but is it funny? One guy in the dance mix makes the commercial, even though he is a bit late to the show, kind of like Blockbuster in general.

This Dish Network ad does actually get right to the point, a man walks into a room and says, “Hey gang, did you hear about dish networks new blockbuster movie pass…” then continues to expand upon what this new service entails, but it gets weird. Let it be noted that there is a strange mix of people in his “gang”, to start the commercial: wife, grandparents, kids, adopted kid?, another man and woman (aunt and uncle?), all sitting around doing absolutely nothing. Maybe that isn’t too strange, but they all instantaneously decide to celebrate this “great” news with music and god awful dancing. At this point, the commercial already has a bunch of white people dancing to the news of more movies from their expensive dish satellite, why not throw in the repair man and mail man to boot? You’re in luck, they do.

There is something to take away from this, and it’s not the family, but the repair man who comes flying into the commercial at the end. The part is played by a somewhat well known youtube star, nathanjbarnatt who does everything from commercials (real and fake), to singing and dancing. We wouldn’t be surprised if this dance video of his for the group Madeon inspired this entire Dish Network commercial. It has almost as random as Nathans youtube channel. 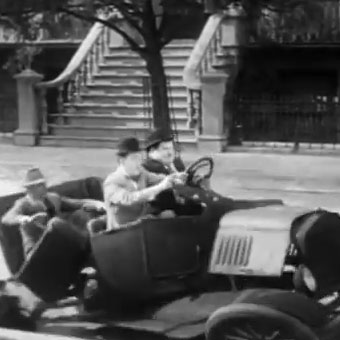 This particular ad is slightly reminiscent of the Ojai Valley Taxidermy viral ad from a few weeks ago, but it’s no where near as good, even if Chuck Testa’s ad was funny because it was actually serious. William Jackson Law, on the other hand, uses funny prat falls from old slapstick comedies to let their viewer know they are an accident and injury law firm. That makes sense, right? It gets better though, and it requires a little context.

Almost as strange as Chuck Testa’s reveal, Bill Jackson appears to have discovered green screen and jumps in front of the old film reel. He describes his law office and what it is about, even providing the audience with the catchy sign-off, “just bill it”. Yes, it’s a low cost, local commercial, so it’s bound to be a bit cheesy, but the background music used in this video, which plays behind Bill’s own discourse, is even stranger than it sounds.

You could watch this video a hundred times over and think it is simply a low budget commercial with very little to it, and you may be right. The question is whether or not there was too much, or too little thought into the choice of song. We’d be willing to bet it was too little. What do we mean? Well, the song used in this commercial is from a very strange viral video with an even stranger singer (Eduard Khil of Russia) who looks to be lip-syncing. If William Jackson actually knew about this video and picked the song because of it, then he gets our money.