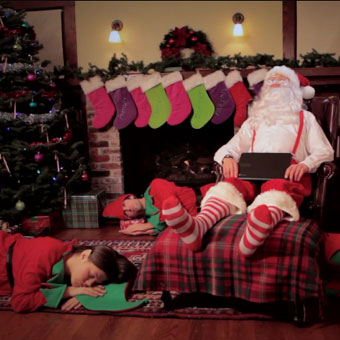 “Google Search Tips Rap” – We had the pleasure on working on this unexpected video  from Google: a music video featuring Google employees who also created the song and starred in the video. The rap is about Santa oversleeping, but he isn’t afraid of falling behind because he has Google search tips to help him make up for his last minute duties. Placed in front of a warm cozy fire, Santa and his elves prepare for the night ahead as screen capture is used to illustrate several search features such as Google translate. The video also has tips like weather searching, and how to use filters to better sort through search results. This is a fun, creative video that is in a format that isn’t readily thought of as a Google style (music video). We had a great time working with Google on this. The shoot was full of cookies, Google products, and laughter. 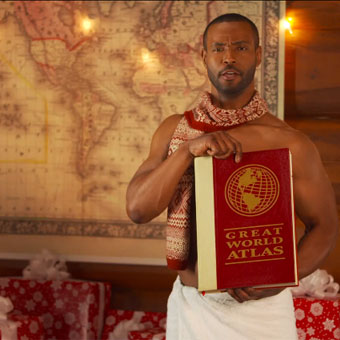 Old Spice “MANta Claus” – Old Spice is back with your favorite baritone voiced, towel donning, wit-filled announcer. In this video Isaiah Mustafa is promoting Old Spices’ attempt to give a gift to all seven billion people of the world. Does that sound impossible? Well in this video alone Mustafa gifted 22 million people- nothing is impossible when you give the gift of good scent. Old Spice has a series of these MANta Claus videos on their channel, 36 in total (to date), some of which include direct conversation with Twitter followers. Old Spice has taken advantage of their viral success and built on it by directly engaging their fans in multiple instances. In a series of videos called “Internet Video Responses” Mr. Mustafa responds directly to fans – this is an unparalleled level of engagement unmatched by any other big brand. Even smaller YouTube channels have a hard time engaging fans as thoroughly as Old Spice has been able to do. It’s also nice to see them keep their traditional witty writing even in shorter videos. 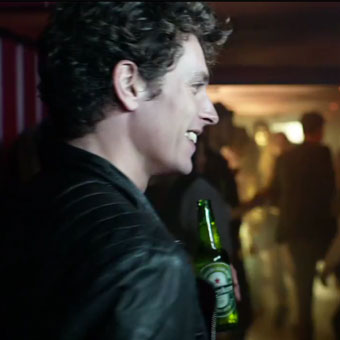 Heineken “Sunrise” – Most alcohol companies have standard ads which feature people getting blitzed with the assumption that they have a designated driver. While there is nothing wrong with this formula, because the companies are still suggesting “responsible drinking” they might be missing the point about excessive drinking, even if the blacked-out person in question gets home safely. An article recently compared drinking habits in Italy with Baltic countries such as Sweden, Lithuania, and Latvia finding that Italians have lower instances of violence as well as health consequences. The researchers found that Italians drank regularly, but that they drank slower while the Baltic countries had populations that drank with the intention of getting drunk. The moderate and consistent Italian style of drinking is more in-line with this Heineken viral, where the protagonist has one beer, but parties all night. He does take half a shot, only to spit fire with it. While this is far less drinking than what Italians probably do, the ad promotes moderation in a way not seen in most commercials. Looking at the 145,000 views this commercial has massed over the last two weeks, and scrolling through the YouTube comments, it seems the biggest fans of this ad like it for the music. The track is great, and emphasizes the importance of good music, which, like this video (and this Weetabix ad), might be all that’s needed to make an ad viral.