Seedwell co-founder and head of business, Beau Lewis, recently had the opportunity to discuss the importance of viral videos, social media, and video SEO in this article for Team Detroit’s Notes from the Observation Deck.  Here it is, reprinted below: 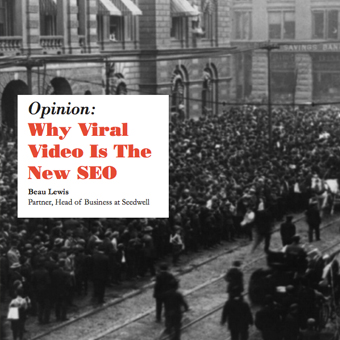 By now, most have seen the Old Spice campaign, Evian Babies, and DC Gymkhana, salivated at the view counts, and pondered their own viral video campaign. I’m not going to tell you the secret sauce of viral video (the subject of our recent Mashable article), and I won’t rehash the value of building buzz. Beyond buzz building, there are two less-discussed reasons why YouTube and virality matter. Surprisingly, neither of them is integral to online video. They are SEO and Social Media.

YouTube is the second largest search engine online. It runs more searches than Bing and Yahoo combined. What is more, YouTube results show up in the other search engines. Videos that rank highly in YouTube search are also found within the first few pages of  Google search results. If you are invested in SEO, it is a missed opportunity not to optimize your YouTube channels and videos.

At Seedwell, as viral video experts, we’ve been amazed to see how many top brands have YouTube channels with URLs that end in “169,” four random videos uploaded, two broken playlists, and no metadata or thumbnail strategy. When we see these ghost towns, we see unrealized upside. It’s a shame because these brands typically already have vaults of  creative video assets (from TV and Web spots), as well as an active group of  users uploading their own related videos.

Optimizing these existing assets and creating a custom-made brand channel can be done relatively efficiently. Building a nice home on YouTube is a smart first step before producing viral video campaigns to make sure the effects are maximized.

Optimizing your brand’s YouTube channel in 2012 is kind of  like having the foresight to optimize your website for Google search back in 1999. Red Bull is a brand that has built a nice YouTube channel to optimize its videos. Video search is still in its infancy compared to Web page search, which makes it easier to differentiate oneself. The two factors at work here are the relative simplicity of  the algorithm and the lack of  competition for search terms. It’s more difficult to decode what is happening in a video than it is to process the text of  a Web page.

You have the metadata (title, keywords, description), combined with the reputation of the uploader (number of  videos, subscribers, channel views), and the popularity of  the video (views, likes, favorites, inbound links). This will evolve as Google does things like image and speech-to-text processing when indexing videos. For the time being, however, there are fewer signals for the algorithm to judge relevance. In this world, content creators who understand the signals, optimize their videos accordingly, align themselves with reputable content creators, and invest in the creation of  regular content will be rewarded. Especially when they get there before the competition.

Because videos aren’t websites, in addition to building relevance, it’s important to establish conversion paths. In order to lead that viewer to the cash register, the best viral campaigns have a conversion funnel with three components. They start by building buzz, then engaging with a social component, and finally converting to a download or sale.

A simple example of these three components at work for a Web-based company would be a combination of  (1) a buzz-building viral video, (2) an engaging Facebook contest, and (3) a landing-page conversion video. The viral video builds buzz and pushes viewers to the FB contest, the contest engages players and offers them rewards at your website, and the landing page video takes those visitors and offers them value in a product.

When it comes to the social component, video is the most-shared medium online. As a tool for sharing stories that elicit emotional responses, it’s the best humans have come up with so far.

This translates to tremendous power for growing social media properties that rely on sharing with friends. For brands that are invested in growing Facebook and Twitter communities, it is a missed opportunity to not also be invested in the creation and curation of video content. In short, YouTube video content can grow your social media.

Beyond being the largest network for the consumption of  video (4 billion views per day), the YouTube platform bears some resemblance to a social media network itself  – one where sharing contributes to building SEO video rank. Every time social sharing happens, the view count goes up, inbound links get created, comments/likes/favorites flow in, and the video’s rank goes up. This creates a virtual feedback cycle where going viral spikes a video’s search relevance.